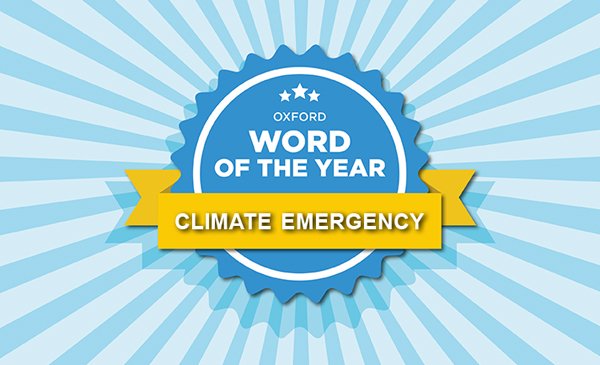 The Oxford Word of the Year is a word or expression shown through usage evidence to reflect the ethos, mood, or preoccupations of the passing year, and have a lasting potential as a term of cultural significance. 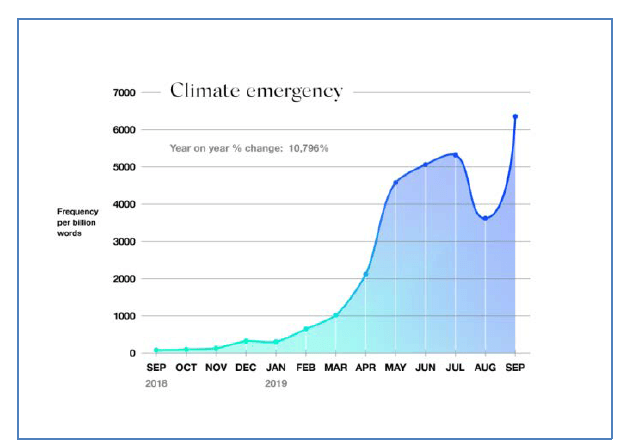 This year, heightened public awareness of climate science and the myriad implications for communities around the world has generated enormous discussion of what the UN Secretary-General has called ‘the defining issue of our time’.

But it is not just the upsurge in conversation that has caught our attention. Research reveals a demonstrable escalation in the language people are using to articulate information and ideas concerning the climate. This is most clearly encapsulated by the rise of climate emergency in 2019.

Analysis of language data collected in the Oxford Corpus shows the rapid rise of climate emergency from relative obscurity to becoming one of the most prominent – and prominently debated – terms of 2019. Usage of the phrase climate emergency increased steeply over the course of 2019, and by September it was more than 100 times as common as it had been the previous year. In fact, it surpassed all of other types of emergency (health, hospital, family, etc.,) to become the most written about emergency by a huge margin, with over three times the usage frequency of health, the second-ranking word. Statistically speaking, this represents a new trend in the use of the word emergency.

Looking at the equivalent data for climate collocations, climate crisis and climate action – both of which are included in our Word of the Year 2019 shortlist – feature alongside climate emergency as the words most typically used to modify climate in 2019. All of these words have exceeded more moderate or speculative pairings like climate variability and climate prediction, and expected connections like climate scientist, which have dominated the usage data for more than 10 years.

Casper Grathwohl, President of Oxford Dictionaries, says, “This has been a fascinating year for the word “climate”, and we see that reflected especially in the way that English-speakers have combined it with other words. We are clearly struggling to articulate our climate anxiety. Language cannot seem to keep up with the accelerating sense of urgency around the issue, resulting in a rapidly evolving set of vocabulary with a new word vying for center stage at every turn. To reflect this, we’ve not only selected a climate-related word this year—our entire shortlist has been chosen exclusively from the rich climate language surrounding us. Together these words tell the story of a rising issue, and of a public debate attuned to the power of language.”

THE WORD OF THE YEAR SHORTLIST 2019

In alphabetical order, the shortlisted words for Oxford Word of the Year 2019 are:

CLIMATE ACTION
Actions taken by an individual, organization, or government to reduce or counteract the emission of carbon dioxide and other greenhouse gases, in order to limit the effect of global warming on the earth’s climate

Our corpus records a 266% rise in usage over the last year, with a dramatic spike in September documenting demands for climate action by protestors at climate rallies around the globe and media coverage of the gathering of world leaders for the UN’s Climate Action Summit.

CLIMATE CRISIS
A situation characterized by the threat of highly dangerous, irreversible changes to the global climate

Increasingly favoured as a more scientifically robust term for climate change across climate science and media reporting, resulting in a 26-fold increase in usage in 2019.

Our corpora record a 4,290% increase in use eco-anxiety in 2019, showing a growing discourse, particularly among young people, around the mental health impact of the climate emergency that has dominated headlines this year.

Amidst heightened public attention to the climate emergency and calls for action, the word
ecocide has had a 680% increase in frequency of use over 2019. The term is at the heart of a legal campaign to make serious damage to the environment an atrocity crime at the International Criminal Court.

EXTINCTION
The fact or process of a species, family, or other group of animals or plants becoming extinct

Extinction has seen a 681% increase in usage in 2019 as scientific analyses report on the breakdown of our planet’s biodiversity attributed to human activity. Our language data records a huge spike in usage in April, corresponding with the launch of Extinction Rebellion.

FLIGHT SHAME
A reluctance to travel by air, or discomfort at doing so, because of the damaging emission of greenhouse gases and other pollutants by aircraft

A translation of the Swedish flygskam, flight shaming is a phenomenon that took off across Europe early this year before going global, resulting in a 182% rise in usage. Growing attention to individuals’ carbon footprints has seen people ditching carbon-intensive air travel for other, greener forms of transport.

In December 2018, Prof Richard Betts, the UK Met Office’s climate research lead, advised: ‘global heating is technically more correct because we are talking about changes in the energy balance of the planet’. As record-breaking temperatures and concern over the future of the Paris Agreement hit headlines around the world, our data presents an 18,358% usage rise in 2019 over the same period last year.

NET-ZERO
A target of completely negating the amount of greenhouse gases produced by human activity, to be achieved by reducing emissions and implementing methods of absorbing carbon dioxide from the atmosphere

More than 60 countries have pledged to achieve net-zero emissions by 2050. However, as initial analysis indicates urgent action is required to meet this target, debate as to what form the action should take has contributed to a 992% usage rise for the term in 2019.

PLANT-BASED
(Of food or a diet) consisting largely of vegetables, grains, pulses, or other foods derived from plants, rather than animal products

From lab-grown chicken to meatless burgers, 2019 has seen increased frequency of discussion of all things plant-based with the trend for clean meat, meat alternatives, vegetarianism, and veganism contributing to the 144% usage increase.