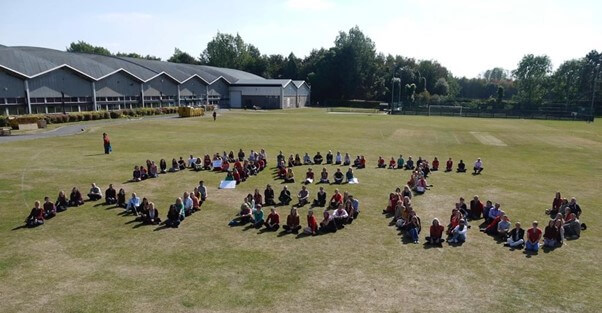 Do you look back and see a moment which galvanised you into action on climate?  For me it was the summer of 2018, when temperatures were tipping 30 degrees, and I was struggling to keep my newborn son cool and myself calm in what felt like an endless heatwave.  I’d considered myself an environmentally responsible citizen up to that point. I recycled.  I bought my clothes second hand.  I’d even experimented with bars of shampoo. But something about that heatwave made me realise that things were a lot worse than I’d realised.

I spent hours with my son asleep in my arms, researching what was really going on and having my eyes opened to the scale and urgency of the crisis at hand.  It was, quite frankly, terrifying (I particularly remember this article), but it also filled me with rage and energy: a sense of what I later learned to call ‘intergenerational responsibility’, drawing a direct line between the actions of my generation and my parents’, and the future awaiting that tiny child and his.  Three years later I would come across a hugely powerful quote by teenage activist Clover Hogan: ‘young people today have not created this reality; we’ve inherited it. And we’re told we are the last generation with a chance to save the fate of our planet’.

Fuelled by my reading, I started to take action wherever I could.  Within a few months I was vegetarian (fairly successful attempts at veganism followed: I still can’t resist cheese), we’d got rid of our car, installed solar panels, I was using our local refill shop, had decided to try not to fly, and I’d signed up with the local Extinction Rebellion group and was attending actions with my son in a sling.  All of which is simply to say that I wanted to do whatever I could to create a better future for my son’s generation, in whatever way I could.

It didn’t take long to realise that proportionally, my footprint, reduced or not, would always be a tiny proportion of my employer’s.  Having quite by chance stumbled into a climate conversation with a colleague who is now one of my closest friends, and discovered that she had just gone through the same thought process, we decided to take our action to the workplace.  We started by inviting colleagues who were concerned about the environment to join an action on the lawn outside our office.  We planned to spell out ‘ACT NOW’, and we worried that we wouldn’t have enough people to do it: maybe a dozen?  It was quite a moment when we turned round and saw 137 colleagues walking towards us to take part in our action.

In the three years since, we’ve advocated for change, usually pushing for any plan to be bolder, more ambitious, and faster.  Other people have done the same, and we have seen huge changes in the organisation – a formal programme of work and roles dedicated to sustainability; an environmental sustainability strategy; positive change through our supply chain; the organisation has even won an award for its work in this area, twice!  But we’re still in the room, still saying we can go faster, bolder, and more ambitious, we won’t stop doing that.  If that’s you too, we’re with you, keep going, we can push for change by amplifying our voices in our workplace, in our communities, and beyond.  We can make things happen, together.

Phil Hazell works at Cambridge University Press & Assessment.  In her day job, she looks after the Learning Solutions team in the English division.  In her free time, she volunteers to support the organisation’s formal programme of work on environment and sustainability, and has just started an MSc in Sustainability.  She’s just discovered, and been really inspired by, the work of ELT Footprint.