In our 10th post in the Greening ELT series, Noni Gilbert, one of the vice presidents of FECEI (the Spanish federation of private language schools) shares an upbeat and optimistic report from their recent annual national conference held in Madrid in February 2020. 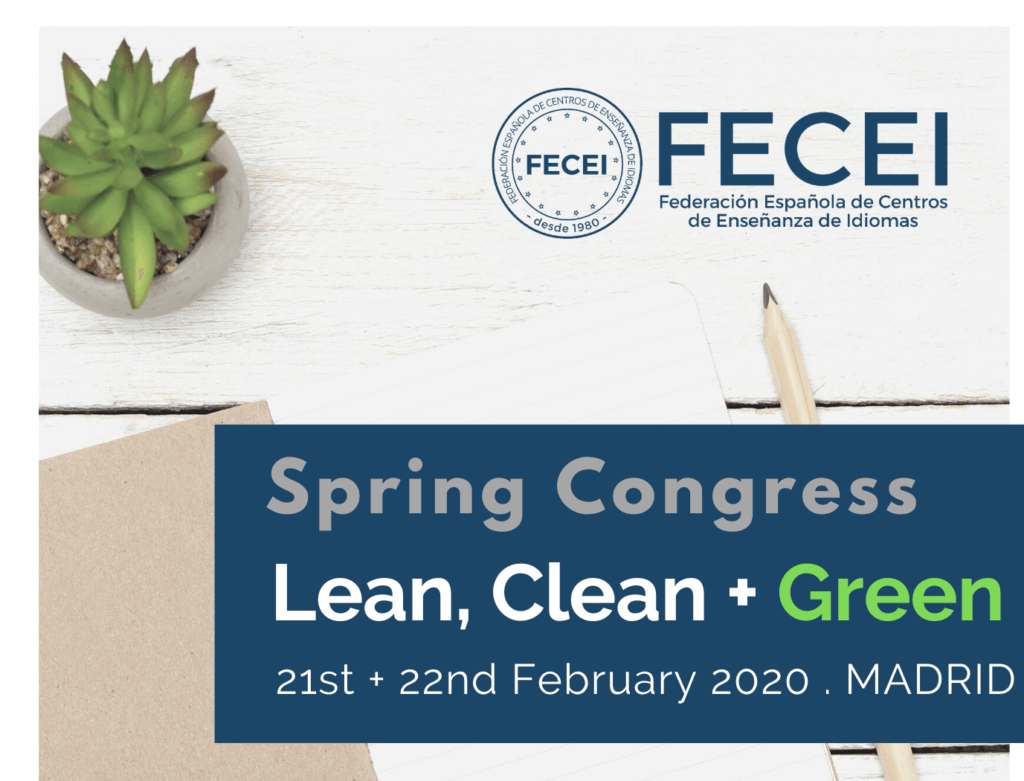 FECEI’s Spring Conference was advertised this year as “Lean, Green and Clean”. Gone this year were the plethora of writing instruments and pads, of leaflets which at best would shortly find their way to the recycling bin, of gimmicky freebies that would soon end up broken and forgotten. In their place was clear evidence of the policy that FECEI had published eight months previously, when it invited publishers and service providers to sign a commitment to review and reduce their use of plastics and single-use materials.

The response at that time was hugely positive, and the feedback very encouraging as our partners contributed ideas from their own internal campaigns. New partners have been signing up for the initiative since then, and FECEI felt its journey towards a greener conference was underway.

The journey hadn’t actually started there of course, nor had it come completely out of the blue. Colleagues had seen with growing distress how our environment was being affected directly by thoughtless consumption. One noteworthy response to the situation was the 2019 Language of the Sea Project, organised by the four regional affiliates in the North of Spain. They organised a series of events, including a mass beach clean-up on May 4 2019, bringing together 1400 volunteers on the beaches of the Cantabrian Sea to clean them of plastic and other rubbish.

Meanwhile, preparations for the FECEI conference were under way, and the organising committee and the federation’s steering and executive committees set to, to ensure that the next conference, and all future conferences, would have as low an impact as possible on our environment. The scope was very wide, and the number of details to be attended to immense. The team worked untiringly, led by our recently elected federation president, Scott Markham.

Speakers, many of whom have been championing pdf summaries to alleviate note-taking for a long time now, were requested to avoid using paper wherever possible, and shifted largely seamlessly from paper handouts to the use of immediate digital resources.

Information about the conference and, in particular, the programme, went digital. Ticketing too, for all the conference events this year. No longer were participants invited to enter their feedback on a piece of paper, instead, all this information was gathered digitally. Sponsors and exhibitors, such as FECEI’s own Greenpositive campaign, displayed QR codes to access information. The die-hard paper note takers were not completely abandoned to their fate: scrap paper was available for those who wanted to scribble something down. The reduction in physical materials handed out or available to participants had a direct result: the waste produced by this conference was drastically reduced. 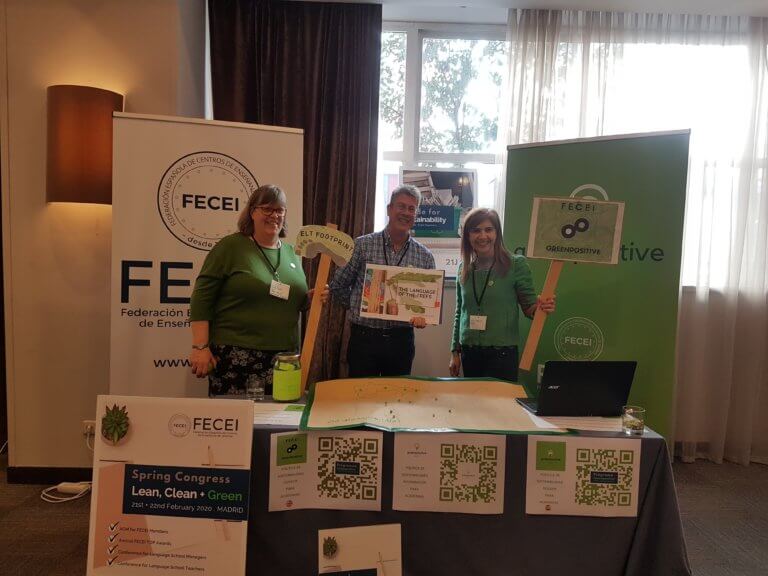 We opened the conference with a round table dedicated to exploring how we as a profession can become more environmentally aware. Before the round table started, participants had noticed a leaner and more sustainable welcome bag. Everyone received a glass water bottle, which they were able to refill from large glass bottles available throughout the conference, or indeed, from the venue’s own water dispenser. And the recycled lanyard no longer carried a plastic pocket: instead, participants received a card embedded with poppy seeds to write their name on. The social media has since been buzzing with photographs of where everyone has chosen to plant their seeds. 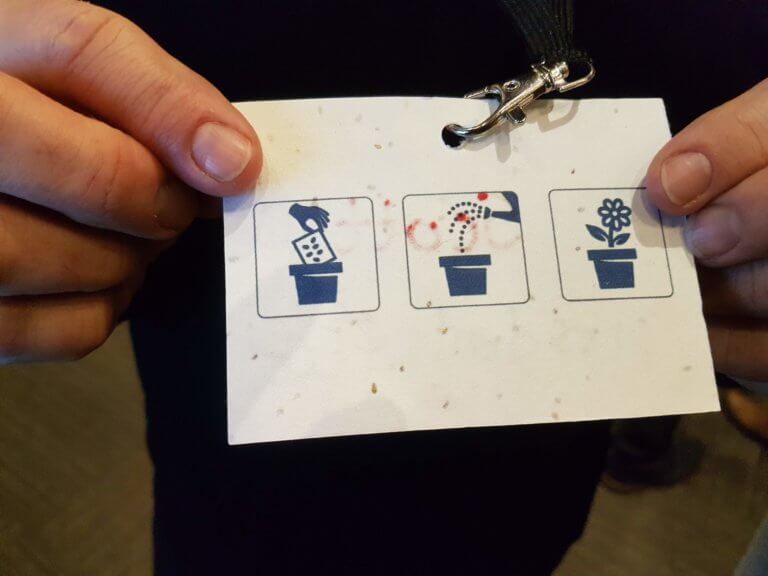 The FECEI Conference has been held for some years now in the same venue, and we were pleased that the hotel was willing to take our green demands on board (and capable of doing this). In a country which until very recently seemed actually to be “anti-vegetarian” (I’ll be raising a few hackles there, but I live in the heartland of meat consumption in the province of Avila in central Spain), it was great to be able to offer a completely vegetarian and therefore far more sustainable buffet menu. 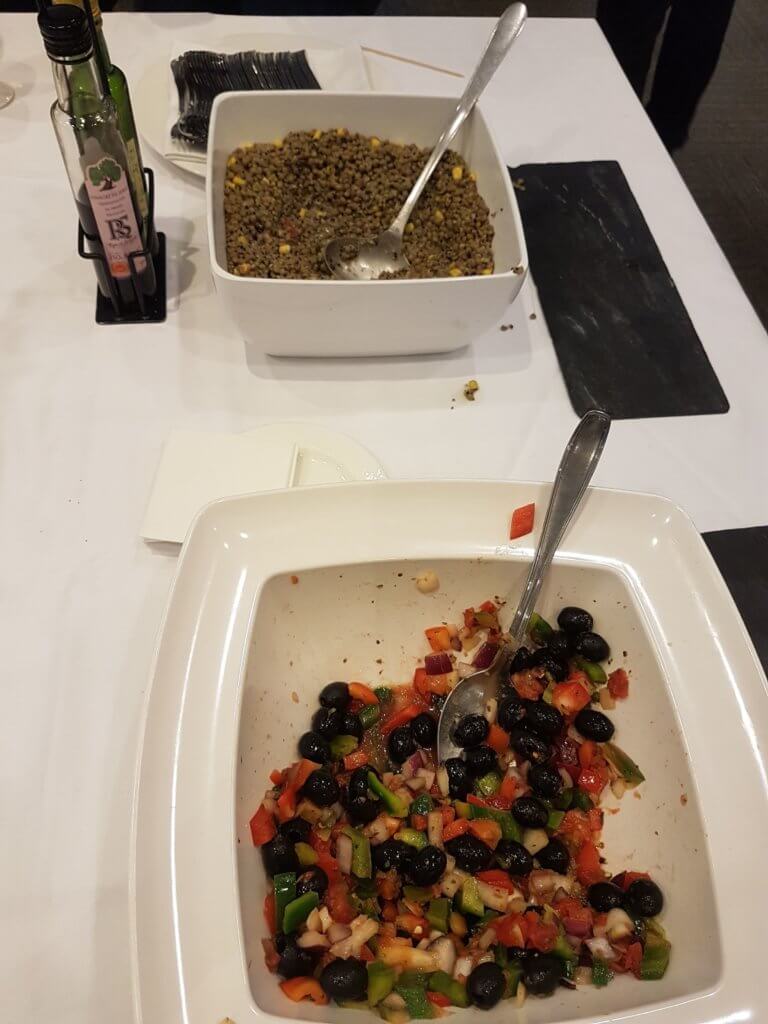 The evening before the teachers flocked to the conference, FECEI held its awards ceremony for good practice in our sector, FECEI Top. Two of the seven awards went to environmental projects (the Language of the Sea and ELT Footprint) and all the prize-winners received the federation’s new sustainable awards, wooden blocks crafted from century-old roof beams, printed with sustainable ink.

That said, we are by no means completely satisfied with the outcome of our efforts. We feel we have taken a great stride in the right direction, but we are fully conscious that there are plenty of areas where we could have done even better. One issue to face, for instance, is the question of transport: do we want to continue to be the reason behind so much travel? The point is debatable, but we know that if we are to continue meeting in person, we need to persuade far greater use of public and shared transport. For the time being, we have given ourselves the traditional Spanish report comment: “making adequate progress”, but we know our journey is still only in its early stages.

PrevPrevious postUsing picturebooks to inspire children to become environmental advocates
Next postImages and the Climate Crisis: moving out of our comfort zoneNext