Diary of an (Amateur) Climate Marcher

Yesterday (Friday December 6), I travelled to Madrid to join the climate march that was organized to coincide with the COP25 summit. According to the reports, there were more than 500,000 people at the march, and it was a humbling experience to be one small drop in that ocean of climate activism. 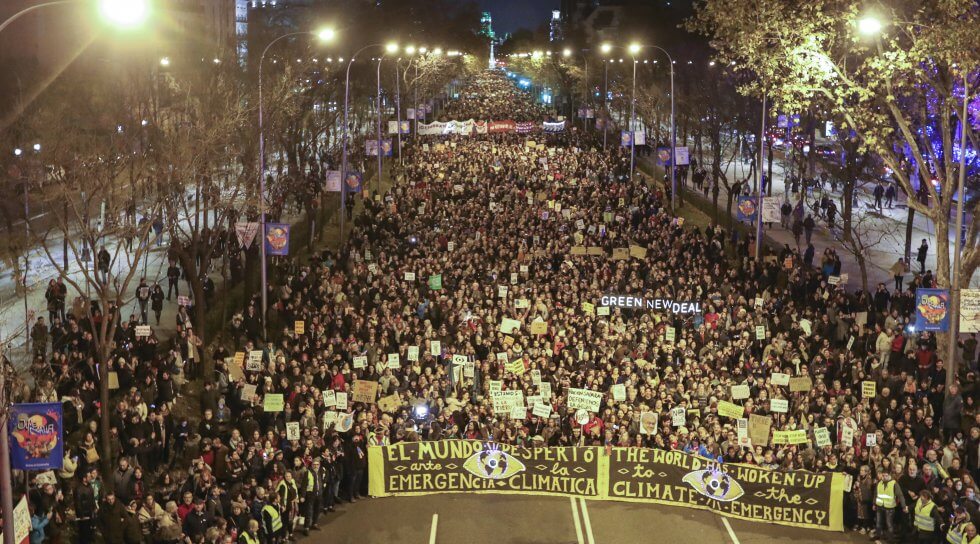 There were all kinds of organisations present: long-standing global environmental activists, Greenpeace; local equivalents, Ecologistas en Acción; new movements that have emerged and flourished over the last year, Fridays for Future and Extinction Rebellion; feminist groups; groups representing protesters in Chile (where the summit was originally to be held) and the indigenous people of the Amazon.  There were religious groups such as Catholics for Climate Action and Spain’s new progressive political parties, Podemos and Más País, were also present.  According to reports in the Spanish newspaper, El País, more than 850 organisations took part.

It was gratifying to see the huge diversity of people joining the march, but also lining the route in support. There were banners and placards everywhere, hundreds of different messages, and interestingly most (at least in the section where we were marching) written in English, the lingua franca of global climate marches wherever they take place. There were also a lot of different chants, led by lots of different groups, some in English, some in Spanish. Some familiar to me from local marches, some completely new.

I wasn’t there with a climate organization. I was there with friends, and friends of friends. And I think this makes for a different experience.  We drifted from group to group, sometimes moving ahead, sometimes getting left behind, often splitting up and having to regroup.  This gave us a chance to sample different moods and modes, to dip in and out of the various displays: indigenous people stopping the march and dancing in a large circular clearing in the forest of people; young climate activists suspended in harnesses unfurling a banner from a bridge over the road. But we also got disorientated at times, feeling a little lost as gaps opened out between the banners and we marched ever faster, the crowd thinning.

When we made it to the end of the route, we didn’t really understand what was happening. We couldn’t see where to go, or where to stand.  We found ourselves on the wrong side of a steep embankment, too late to clamber up and take our places.  Groups with their banners were lining up on the other side of the embankment, facing an empty stage.  We tried to gauge what was going on in a live stream on my phone.  At this point we felt a little dejected.  We’d come this far but we seemed to be missing out on the party.

So, we turned back, and started to retrace our steps.  As we did, we saw group after group still marching purposefully along the road. It gave us a much better picture of the huge variety of organisations, the sheer numbers of marchers, but it also meant that, although we had traced the route both up and back again, we had missed the heart of it all. We had missed the speeches by Javier Bardem and Greta Thunberg. (Click on the names to hear them). We had missed the climax.  And I started to wonder if we’d missed the point!

As we left the march and merged back into the crowds of Christmas consumers, the feeling grew.  The Christmas lights (or most of them) had been switched off along the route for the duration of the march, but just two blocks away the shops windows were glittering with festive bling and long queues were forming to see the Grinch.  The contrast felt almost surreal.

I made me question (not for the first time), the value of individual actions, of turning up, of adding one more face to the crowd.  Rather than feeling energized and motivated, I felt deflated.  I’m not sure what I’d been expecting. Some kind of magic-wand moment?  When we got back to home base and saw the images on the news, at first I felt a pang of jealousy.  But that quickly faded into admiration for all the activists who made it happen, who led the crowds, who motivate themselves and others to keep going.

It’s not easy.  It’s not simple. The solutions need to come from those who were not on the march; the political leaders (quick to tweet but not so quick to walk the walk), the governments (announcing a climate emergency but not following it up with actions), the multinational corporations (greenwashing their image with facile publicity stunts).   But that doesn’t mean we should give up.  I think we need to keep doing what we’re doing.  And I want to keep looking for ways to do more and to do it better.

(This is my own personal take on the march and each and every person in that crowd will have their own, which might be very different. If you were there, and want to add your account, please comment below. Thanks!)

PrevPrevious postGuest Post: Words of the Year – New Language for a New World
Next postWelcome to our new website!Next

7 thoughts on “Diary of an (Amateur) Climate Marcher”